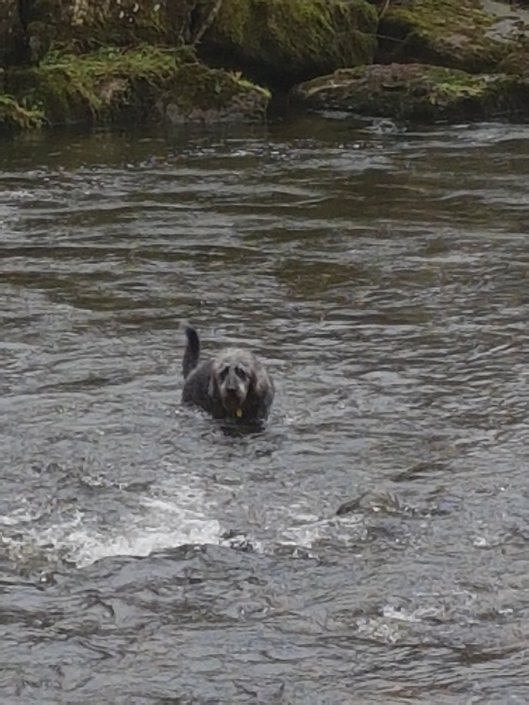 As his natural habitat called, his longing heart whined as loud as his voice. The harsh glass that lay between him and the vast expanse of delight tempting him was just cruel. It was at times like this that he wished he could behave like the rebels that he saw around him daily, who would have found a way of removing this obstacle, but he knew he had to behave. The lake gleamed at him from a mere few feet away. He wanted to jump into the lake so bad and return to his happy place. The Loch Ness Minster wanted to return to where he belonged.

Bringing our little Minster Munch to a Wetland centre for a family day out with my granddaughter seemed a good idea at the time. On duty Minster tended to behave himself when out in public so that day should have gone smoothly. Momentarily disremembering that his labradoodle traits loved the water with a passion, we arrived for a day full of fun. What we got however, was a day full of tantrums Not from my 2-year-old granddaughter who was an angel but from a stroppy 3-and-a-half-year-old dog who wanted to swim with the ducks.

As soon as his eyes saw the water, he thought we had brought him to doggy paradise where he would be able to swim for hours on end. His happy whining and excited barks that left his on duty persona down, echoed around the centre as my embarrassment grew. Nonchalant ducks and birds waddled past him and he didn’t bat an eyelid but as soon as he heard the water splashing from his feathery friend’s antics, he barked to be let free. As I cringed my way through the day stopping to explain to him that he couldn’t go in, I vowed never to bring him again as it seemed so cruelly enticing for him to resist and he found it hard to keep his mind on the job. He is great at his job but at the end of the day he is a dog and dogs like to have fun.

Water to off duty Munch, is a forever friend. During his early socialisation, he was introduced to water so he will always associate this with fun. As the Labradoodle breed originates from two water retrievers, it is in his genes to become a water fur baby. He loves to swim and spends ages in lakes or rivers if he gets a chance if we are out free running. He was once so eager to get into a lake that he managed to get his two front paws well and truly stuck in boggy ground surrounding the lake and it took my friend quite a while to reunite his 4 paws on solid ground. This has never put him off.

If he is around other dogs in water, he will be the mad one causing a water tornado and a tsunami by whirling around far too fast. He is the one that leads other dogs astray and tempts them into water even if they cannot swim, as he runs off with their ball. He is also the first to share the water with us all as he comes close to us for a shake to shower his love onto us. Wherever there is water, the Loch Ness Minster can be found lurking as he feels at home in the H2O.

Guide Dogs are trained to ignore distractions but there are some distractions that cannot be ignored. His whining to play that day, reminded me that being around water for this Diva dog is just too tempting. As we walked back to the car, his downward facing tail said it all. Life was not fair. A prolonged paddle in a nearby lake the following day did however help me get back into his good books. We have learnt to compromise on things like this over our time together which is just as well as The Loch Ness Minster will always seek to return to his domain.

19 thoughts on “The Loch Ness Minster”